The complexity of life is inevitable. It is also surreptitious; it creeps and crawls along the floor of our unkempt abode, clawing restlessly at our heels as we walk along this mortal coil, slowly piling bit upon bit of both product and refuse. Now the pile is at our calves, barely touching our knees as we push ever forward through the growing swamp of complexities. Now we are wading in it, arms in the air, holding only our most prized possessions above the burgeoning mire, more and more conscious of this complexity. Soon, we are suffocating.

But there must be a solution. After all, it is certainly true that some people have apparently traveled through life and mastered the mire, subdued the swamp, and conquered the complexity. But how? Is it a dedicated organizational discipline? An unflappable tenacity for neatness? A simple fortuitousness (and a large bank account)? Maybe. Still, I proffer a different explanation: precognitive inception. 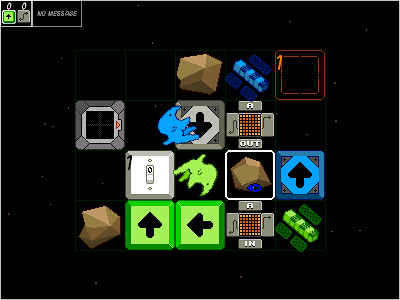 SPACE SOLVES THE PROBLEM OF SPACE

John Saba has taken what has often been believed to be a foolproof approach to taming the rambunctiously capricious aesthetic desires of popular imagination and applied them to cute neon-colored mini-dinos: he has tossed them into space. In said space they are flung about between space stations, space asteroids, and space direction-changing arrows. You are only given control of one of these things.

It is with this one thing that you will achieve the following goal: send these poor, helpless dinos home. On the way, collect snax, avoid space asteroids, and admire their cute, stubby, useless dino claws. As a goal, it is far from complex. And yet the same could be said for life, too: the goal there is to simply survive. And yet it is the varying qualities of survival and the increasing number of obstacles placed in one’s way that give rise to that inevitable swamp, that inexorable mire. And here is where the problem and the solution intersect.

Dinos in Space provides a model for conquering complexity. 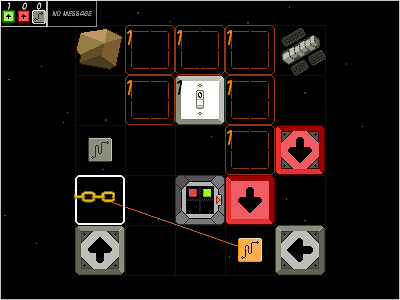 OF FUNDAMENTS AND FOUNDATIONS


In the same way that the mind of a woman continually confounds any and all attempts at interpersonal peace, so too are some complexities inherently inscrutable; they are either too recalcitrant, resisting modification or simplification in the name of solution, or perhaps too unforgiving, disallowing for trial-by-error perfection and iterative learning. Worst of all they may simply be too complex: an incomprehensible combination of all these confounding variables so inextricably intertwined that to attempt to solve them would be like trying to unravel a knotted ball of yarn that upon the first pull of a string you find that the string is subsequently tugging on a sharpened blade poised dangerously near your fragile, pulsating jugular vein.

The only way to solve such complexities would be through a hypothetical. As your life force dangles precariously upon the edge of said sharpened blade, you may yet save yourself from an untimely evisceration by constructing an analogue: a comparably complex complexity, and then by virtue of solving it attempt to disentangle yourself from said yarned deathball.

At first you would start small, with only a few pieces of string. You would accustom yourself to seeing strings, to understanding string, and to thinking in terms of string. Little by little you would introduce knots, and then loops, and then perhaps a dull stone blade. You would fail and perhaps cut your hand. You will bleed. You will curse your clumsiness and decry your foreseeable untimely evisceration. But you will also begin to see. You will see solutions. You will understand the steps. You will begin to disentangle the connections. You will begin to see your way out, and you will delight in the epiphany of an eventual escape. You will avert your untimely evisceration.

It is this gentle, iterative curve which Dinos in Space replicates so deftly in its puzzley nature. It is as though John Saba knows something; that he believes something so strongly that it cannot help but burst through in the puzzle design of this game. If we were to peer into the folds of his mind I am convinced that we would met with no less than an intricate network of neon-colored dinos being shuttled about on direction-changing arrows, gracefully avoiding space asteroids, picking up dino snax, and gliding safely into their welcoming spacely abodes. And if you play Dinos in Space, you will no doubt end up with such a network embedded in your own brainly folds. 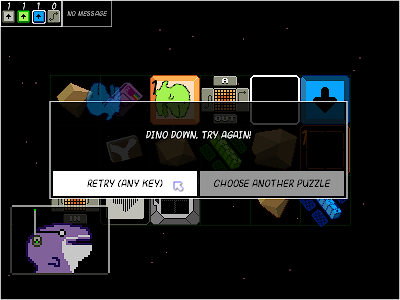 THE COLOR IS THE KEY

One of the more popular ideas floating around in the frontier world of indie game development is that of procedural generation: code an algorithm or a script, leave some blanks for custom parameters, insert values into those blanks, and then let fly with the algorithm. Allow the subsequent primary, secondary, tertiary, and at times quaternary folding and interactions create for you a thing of great complexity and (hoped for) depth. The idea itself is all too appealing, playing off deep-seated notions of The Cosmic Watchmaker and Marxist Determinism. But it is missing something. It is missing inspiration.

Since every puzzle in Dinos in Space is hand-crafted, it means that every puzzle is also meaningfully so; each tile placed is not a passive act of box-filling, parameter-guided, scriptly obeisance, but rather an active one, each loaded with meaning and shrouded purpose such that to correctly deduce these purposes and apply their meanings consistently results in correct solutions. These hints can be found in every piece of every puzzle, and they work without fail. In one puzzle, the provision of a fixed yellow left-arrow may confound your first 10 attempts at solving it. But once you realize that the arrow is not a barrier to be broken through but rather an enormous neon finger pointing you to save those yellow buggers first, doing so results in all the other pieces falling into place. Time and again John Saba’s puzzles reflect this kind of process, and eventually we learn to see not only the solution, but also the inception and stepwise formation of his creations.

So while procedural puzzle generation may give rise to an unfathomable amount of content, all of that content remains trivial, purposeless, and limited by nature, because said content is founded on a fixed script that, once conceived and understood, produces no real novelty. And since Dinos in Space is not procedurally generated, its puzzles continually change, continually, grow, and continually surprise while only ever using 4 different colored dinos, space arrows, and space stations.

KNIVES AND STRINGS, LIVES AND THINGS

At the end of 40 levels, you will cut yourself free. At the moment that string snaps, you tilt your head to the side, only slightly, feeling the strings unravel, slithering about your ever-freeing shoulders and torso. You begin to shake them off gently as the knife falls closer and closer to your throat, maintaining your head half-cocked. Finally, your hands are fully free, but as you raise them to catch the falling blade you realize there is no time. You jerk your head further, harder than you intended but necessarily so, anticipating a slice of pain along your jugular. Instead, the blade slips by, its flat edge cascading gently along your neck, its chill bringing a strange, but euphoric, comfort to your pulsating, corticosteroid-engorged veins. You have averted your untimely evisceration.

As you hold the blade in your hand, you find yourself bored. Bored of this safe life. Bored of the lack of complexity in your day-in, day-out, waking world. The mire of a muddled life around you seems less…muddled. You look back to the moment of your piled-upon complexity and now see a clear path; you look forward to your future and see the simplicity of survival. You look at the now-tattered lengths of strings that once bound you and you begin to miss their gentle impress, their confounding constraint, and your impending doom. You miss the strange euphoria of a cold blade on your fragile throat, and by God, you want other people to know how you feel. 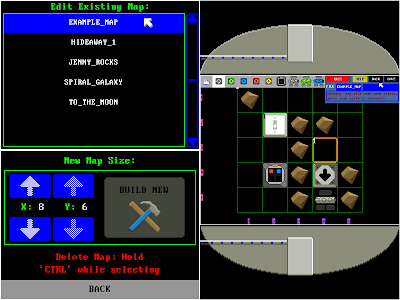 Don’t worry too much, then. Dinos in Space comes with a level editor, too.